This week, The Gathering had the pleasure of being a host church for SHALOM—a ministry that “Serves the Homeless with Alternative Lodging in Middletown.”  This year, our Gathering Shalom coordinator had a unique reason for wanting to serve.  Just one year ago, he was a Shalom guest himself.

“I’ve been there,.” he said.  I know what these people are going through.” Roger Bush came to The Gathering one year ago, found a welcoming church and a place to grow in his faith.  Then ,he answered God’s call to “comfort in the way that he had been comforted” through the ministry of Shalom.

Shalom is a multi-denominational coalition of 11 churches that was started in 2003 to respond to the growing homelessness in Middletown.  Beginning in November through March, each church provides shelter, hot meals, and transportation for the homeless. The homeless stay one week at each church and then rotate to another church in the network.  While staying at the host church, the guests receive two hot meals a day, a bed and bedding, laundry facilities, and the fellowship of church members who visit in the evening— with gifts, games, and conversation.  “We want to make it a home-like atmosphere for people who feel very isolated and alone during the winter months.” Said one of the volunteers.  This week, The Gathering provided space for 5 women, 9 men and 2 children.

While I have been a part of this ministry for 11 years and have watched hundreds of servants give of themselves, I was struck last night by the extra touches that Roger brought to the people of Shalom—extra touches that help them to see themselves as Christ sees them:   loved, valued, and accepted.

Extra touch #1   Every Shalom guest was given their own cup with their name on it for the week. When you have very little or nothing at all to call your own, these little possessions mean a lot.

Extra touch #2   Every guest was assigned cleaning duty for one day of the week.  I have never seen the church so spotless!  Every person staying in Shalom knew that they played an important part in giving back to the church that served their needs.

Extra Touch #3  Every night, even though it was cold outside, the fire pit was filled with donated kindling and a campfire was started in the back parking lot for roasting marshmallows and s’mores—an extra touch of childhood memories to warm lonely hearts.

Extra Touch #4  Padded mats were arranged on the floor so that everyone slept with carpeting underneath them.  "It will keep people warmer tonight", said Roger.  “There’s nothing like sleeping on a cold tile floor.”

Extra touch #5  Salad was served at most every meal—a rare delicacy for people who have little access to fresh fruits and vegetables.  Every morning, a bowl of fresh fruit was placed on the table before they left for the day.  “You’ve gotta eat your fruits and veggies to stay healthy!”, said Roger to each person on the way out.

Tonight, the guests will be arriving at about 5:30 and Roger will be ready.  He will be organizing the servants in the kitchen, putting out more beds for the newcomers, and more than likely, looking for the next “extra touch” that will bless a homeless person’s heart this Christmas season.
Posted by Pastor Carrie Jena at 11:26 AM No comments: 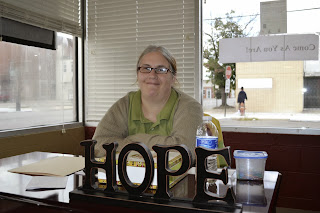 HEALING RELATIONSHIPS
“What the Poor Have to Say About Responding to the Poor.”

I believe that Shawn’s feelings are shared by many people both inside and outside the church today, particularly around the holidays.  As a pastor who has served in an urban setting for 7 years  I sometimes struggle with knowing the best way to respond even though the needs of the poor are right outside my door.  How should we respond to the poor?   I believe that the best answer to that question comes from the poor themselves.  Here are some of the insights that I have learned from listening over the years.

1      Relationships Heal--If you ask most middle to upper middle class people,  “What are the biggest problems facing the poor and homeless today?” They will usually say, “money, housing, and jobs.”   And they would be right.   But if you ask the homeless the same question,  they will say, “Loneliness, Fear, Depression, and Worthlessness.”   Jesus knew that relationships heal.  That’s why he did not just give handouts and send people on their way.  He took the time to sit with them, to listen to their stories and to see their worth as human beings.  That’s why the seating at The Gathering is arranged with round tables rather than pews.  Because we believe that relationships are formed around the table.  How can your church’s outreach to the poor provide not just relief, but relationships?

2      Cash is Not King— Our church has adopted a “no cash” policy when it comes to giving relief. Why?  Because our downtown community, like many urban settings is plagued with addiction and cash is the currency of choice. Therefore, when someone asks you for cash, respond with caution, but be prepared with an alternative.  Consider carrying gas cards,  bus tickets, gift cards, or coupons from local fast food restaurants. In addition, once a month, our church holds a special prayer service and takes an offering for the poor.  All of the money collected from that offering supplies our church office with emergency needs. And remember:  Once you’ve helped someone, make sure to invite them to church or to the next event at your church.  Find a way to feed the poor in your community both spiritually as well as physically.

3    Give the Poor a Way to Give Back—If we are not careful, the church can become an enabler of dependency by not giving those who receive assistance a chance to give back.  When Haiti was devastated by an earthquake in 2009, our church was new and worshipping about 45 people in the basement of another church.  Most of the people who came were living in homeless shelters, were unemployed and were consumed with worry about how they would get by.   That Sunday, we looked at the pictures of the devastation in Haiti and the tremendous loss of life there.  I told them, “if you have a roof over your head, you have more than the people in Haiti today.  If you have a hospital to go to, you have more than the people in Haiti.  If you know where your next meal is coming from, you have more than the people in Haiti.”  Then I asked,   “How can we give of ourselves to help these people in such great need?”  The rest of that morning, everyone at The Gathering pitched in to pack emergency health kits to be shipped to Haiti the next morning.  The people who came to church that Sunday with heavy burdens and worried faces, consumed with their own problems, left with smiles, expressions of thanks and a newly found purpose.  One man said, “ I never realized that I had so much to give.”

Rev. Carrie Jena is the Pastor of The United Methodist Gathering in Middletown, Ohio. She may be reached at ceesuej@aol.com.   The Gathering worships 125 people from the downtown Middletown community on Sunday morning and over 100 for Christ-Centered addiction recovery on Monday nights.   Donations may be mailed to PO Box 30 Middletown, Ohio  45042
Posted by Pastor Carrie Jena at 11:01 AM No comments: